I was gifted an ARC copy from the Author in exchange for an honest review. 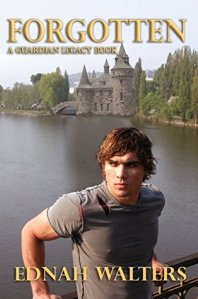 “Forgotten” takes the Guardian Legacy series in a new direction, as Lil wakes up on Mount Hermon Island after months of unconsciousness only to find that she has no memory of her life before waking up. As she learns about life there, and deals with her father and half-sister, she learns about the rules of society among the Hermonites and champions the cause of the minions, those who were unlucky enough to be born without powers. As she moves forward toward fulfilling her destiny as the one who will unite her people, she has to balance her responsibilities and her love for Bran.

First thing first: Ednah, love, I love you woman. You are a brilliant writer and thank you for letting me read this book earlier.

God! THIS IS JUST AMAZING! I loved the previous books and this one I just simply ADORE! I was so not expecting the twist in this part! It’s simply ingenious!

Lil is waking up 7 months after the Tribunal with no memory or whatsoever. There is a big whole in her mind and she can’t remember anything or anyone. But she doesn’t disappoint me. She is still the same Lil. The Chosen one with a lot of power but still with amazing level of compassion. She still wants to help those who are mistreated and in pain. She helps the minions. The Hermonites with no powers, as a good leader would do. But she is also betrayed and she is not sure, who she can trust. The only person to seem always be there for her is a handsome, green eyed boy 😀

Bran….sigh…he is just perfect. Again he is risking everything to just be with Lil. And I love it. He agreed not to interfere with her journey, but helps her as much as he can.

Ednah has shown us a different side of Valafar. And I have to say. I liked it. I really started to love him as a father figure. He was a totally different person in here. You could see that he loves Lil. And he would do almost anything for her. I still don’t agree with his actions, but I do like him a bit more.

As always I want to kick Ganyn’s and Solnage’s butts. They so annoy me!

I miss Lil’s Guardian friends and her Grandfather a lot here, but her new friends are also amazing! I hope we will be able to see them much more in the next part!

This is the best part of the whole series! You can see how well the characters are developed and story just flows perfectly.

Amazing 5 stars!!! Just becasue there is no option to give more!

Reviews of books that I love.